In the past week, the COVID-19 has eased both at home and abroad. As before, 1) we reviewed the important progress in the new crown field in the past week; 2) Current global epidemic situation; 3) To analyze the reasons for the cancellation of new crown screening in the United States.

A brief summary of the latest research progress in the past week is as follows:

2. Novel coronavirus refused to be captured without a hand, Omicron ba 4/BA. The immune escape was more obvious in both groups; This immune escape is not only for vaccinators, but also for those infected with Omicron mutant.

3. The lethality of Omicron mutant is significantly lower than before, but the sequelae of new crown infection will still be a huge burden. In all populations, the mortality of Omicron mutant infection was 21% (US) or 31% (UK) of delta, and the decline was more obvious in young and middle-aged people. However, the harm of Omicron in the elderly is still very obvious; Vaccination is not only the key means to prevent infection and severe illness, but also can significantly reduce the incidence of infection sequelae. 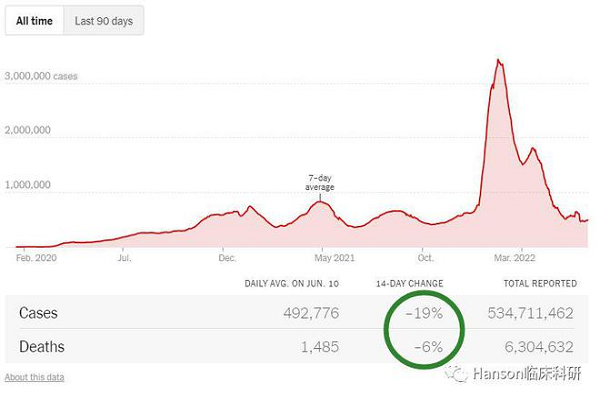 In terms of the absolute number of new cases, the United States has the largest number of confirmed cases in a single day, followed by Taiwan, China, Germany, Brazil and Australia

C. On June 10, the White House announced that it would withdraw the covid test for international passengers entering the United States. There was no need to show a negative test certificate when entering the United States. The covid test was implemented on Sunday [1]. It was a presidential decree signed by US President Biden when he first became president in january2021 to produce a negative certificate for entry. 90 days after the cancellation of the negative certificate, it will be re evaluated to determine whether to continue the implementation.

There are various interpretations in the circle of friends about the news that the United States has canceled the entry new crown test; It's not that complicated.

A. From the perspective of COVID-19 control, the current impact of entry screening in the United States can be ignored.

International border management is to prevent the import of overseas epidemics into China, especially from areas with high incidence rate of COVID-19 to areas with low incidence rate. The United States has long been the country with the most serious epidemic in the world, and domestic transmission is the main factor.

As Dr. Luciana Borio, former chief scientist of the U.S. Food and Drug Administration (FDA), said: most of the transmission in the United States occurs at home.

"If the entry new crown test is to minimize the number of cases of covid-19 in the United States, the impact of entry screening can be ignored."

B. Canceling the entry new crown test can bring great benefits to the United States

The tourism industry and international flights benefited the most. The American Tourism Association, a trade organization, estimates that the cancellation of the entry screening requirements will bring 5.4 million additional international tourists and 9billion US dollars of additional travel expenses to the United States by the end of this year. The impact on the exit of Americans is equally important. Many Americans are afraid to leave the country because they are afraid that they will not be able to return to the United States on time due to the new crown positive.

The decision to cancel the new crown entry screening has also caused a lot of controversy in the academic circles [1]. Meegan zikus, a bioethicist at Grand Valley State University in Michigan, said that canceling the mission "completely ignores the safety and well-being of high-risk groups". However, William hanage, an epidemiologist at the Harvard th Chan School of public health, said that although this change may lead to some new infections in the United States, its impact is much smaller than other policy decisions (such as the abolition of the requirement to wear masks).

"In many parts of the world, the current infection rate is lower than that in the United States. Compared with most random places overseas, you are much more likely to be infected in bars in New York City or elsewhere."