Ag swab nasal: what are the effects on vaccines and drugs

Ag swab nasal: what are the effects on vaccines and drugs

Although the severity of the pathogenicity of the Omicron strain is lower than that of the delta strain, its unique "advantage" makes it ultimately "beat" the delta strain to become the mainstream strain in the world. Studies have shown that in addition to the fast transmission speed, Omicron has a significant immune escape ability, which can escape the humoral immune barrier established by vaccines or other variants of the new coronavirus before infection.

The three newly emerged Omicron subtypes - BA.2.12.1, BA.4 and BA.5 have strong immune escape ability. On May 2, the team of Professor Xie Xiaoliang of the Institute of Frontier Interdisciplinary Studies of Peking University published an article on bioRxiv, a biomedical preprint website, evaluating the immune escape of the above three new subtype strains. The study found that all three strains had the L452 mutation on the spike protein, which is key to their immune escape.

The L452 mutation is also a key mutation in the delta strain. Bedford previously predicted that strains such as BA.2.12.1, BA.4, 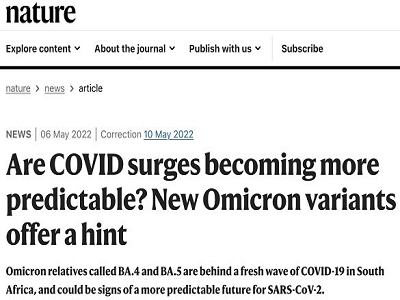 and BA.5 with L452 mutations superimpose the mutations of Omicron and Delta, which have more transmission advantages and may become the main epidemic mutations in the future. strains.

The WHO also stated that the recent surge in new crown cases reported in some countries may be due to the higher transmissibility and immune escape characteristics of the descendant lineage of Omicron. Based on the current limited data, BA.4, BA.5, and BA.2.12 appear to have a proliferative advantage over BA.2, but no differences in pathogenic severity or clinical presentation have been identified.

According to the U.S. Centers for Disease Control and Prevention, as of April 23, infections caused by the BA.2.12.1 subtype strain accounted for nearly 30% of the total number of confirmed cases in the United States. In some areas of the northeastern United States, BA.2.12.1 has surpassed BA.2 as the predominant strain. Rochelle Warrenski, director of the US Centers for Disease Control and Prevention, said recently that BA.2.12.1 may be 25% more contagious than BA.2. Researchers are studying the effect of this subtype strain on the effectiveness of the new crown vaccine. South Africa's daily increase in confirmed cases of new crowns has recently increased, and the country's health agency is concerned that the BA.4 and BA.5 strains may trigger a fifth wave of the country's new crown epidemic.

As a highly differentiated mutant strain, Omicron has 26 to 32 mutations in its spike protein, some of which are associated with humoral immune escape potential and higher transmissibility, the WHO said.

Therefore, the constant mutation of the spike protein region of the new coronavirus is not a good thing for vaccine and drug development, and the speed of vaccine update may be difficult to catch up with the speed of virus mutation. The research of Xie Xiaoliang's team showed that compared with the BA.2 subtype strain, the immune escape of BA.2.12.1, BA.4 and BA.5 to the sera of 3-dose vaccine recipients was enhanced, especially for BA.1 strain infection Serum escape in recovered patients was significant. This means that vaccine boosters based on BA.1 subtype strains may not be ideal for broad-spectrum protection.