Is Europe overly optimistic about COVID-19

From the UK to Denmark, European countries are changing the way they deal with the COVID-19. The emergence of the Omicron mutant strain in Europe has become a turning point in the COVID-19 epidemic. Despite an unprecedented increase in the number of infections, European countries have begun to treat the virus with a more relaxed attitude as most infected people show mild symptoms.

In late January, the United Kingdom and Ireland were the first to lift various restrictions put in place to control the spread of the 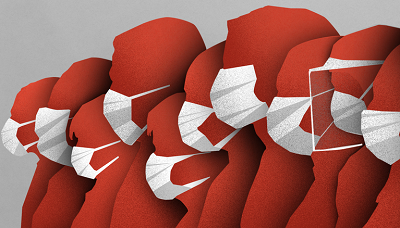 virus. Since then, Denmark, Sweden and other countries have successively announced that they will return to normal before the epidemic, no longer requiring people to wear masks, bars and restaurants have reopened to welcome guests, and museums, art galleries, theaters, and cinemas have returned to people's lives.

Hans Krueger, director of the World Health Organization's Regional Office for Europe, said recently that Europe is approaching the end of the COVID-19 pandemic. In an interview with "Caijing", a spokesperson for the European Office of the World Health Organization said that the COVID-19 epidemic is a global pandemic, and each region and each country is at different stages of the epidemic according to the spread of the virus and the vaccination rate. "In Europe, Omicron's high transmissibility, lower virulence, and improved population immunity all herald the arrival of a new phase in the COVID-19 pandemic."

It is too hasty to treat the new COVID-19 as an endemic epidemic or influenza.

The Omicron variant can still cause serious infections, and it is more likely to cause the epidemic to spread in the community than the delta variant.

Omicron has become the main mutant strain circulating in Europe, and it is predicted that by March this year, Omicron may infect 60% of Europeans. However, compared with when the new COVID-19 first appeared, most of the population of European countries has been vaccinated against the COVID-19, especially in Western European countries, the hospital admission rate caused by Omicron infection is significantly lower than the Delta strain.

Geoffrey Lazarus, head of the health system team at the Global Health Institute in Barcelona, Spain, told "Caijing" that after the appearance of Omicron, people began to believe that this marked the end of the COVID-19 pandemic, but there is not enough Scientific evidence can prove that the end of the pandemic has come.

Lazarus is also a member of the COVID-19 committee of the international medical journal The Lancet (000516). In his view, although some control measures can be reduced at this stage, "it is wrong to end all control measures now, and it is also wrong to let the public hope that the epidemic has ended."

Beware of the "lemming effect" of unblocking.

May Stell, who lives in London, feels the London she knows is back, with streets getting busier, bars reopening, and she can finally go to the theatre again. But after two years of the COVID-19 epidemic, she felt a cultural change: people accepted wearing masks. Even if it's no longer a legal requirement, most people using public transportation today follow the mask-wearing rule. And she still remembers people's resistance to masks at the beginning of the COVID-19 outbreak.

In late January this year, the United Kingdom first announcing that it would abandon the restrictions related to the COVID-19, and England terminated the vaccine pass system and the mandatory mask order.

On February 9, British Prime Minister Boris Johnson further announced that the United Kingdom will end all control measures related to the COVID-19 epidemic one month earlier, which means that from February 24, even if people are infected with the COVID-19 virus, people will not asked to self-isolate. The UK currently requires infected people to self-isolate for 10 days.

Stell isn't sure the UK's move to lift the ban is safe, but the less dangerous Omicron than the delta strain has led her to gradually accept the new COVID-19 as a normality in her life. "The COVID-19 virus has gradually become a part of life, and it is no longer the fearful and unknown new virus at the beginning of the outbreak." Stell told a reporter from "Caijing".

After the average daily number of infections exceeded 200,000 in early January, the number of confirmed cases in the UK began to fall, once below 100,000, but the number of new cases rose to 162,000 on February 10. More than 70% of the UK population has been vaccinated against COVID-19 now.

However, compared with the aggressive approach of England, Scotland has shown a more cautious attitude. On February 9, the Scottish government extended the validity of laws related to the COVID-19 epidemic. Measures such as wearing masks in public and showing vaccine passes at major events were originally set to expire on February 28, but have been extended to September 24. Scotland's Deputy First Minister John Swinney said it was still necessary to maintain some basic measures while easing restrictions.

Ireland is also one of the first countries in the European region to relax measures to control the COVID-19 epidemic. From January 22nd, bars, restaurants, nightclubs, movie theaters, and theaters have resumed normal business hours, the scale of party is no longer limited, and employees working at home will gradually return to the office. Irish Prime Minister Michelle Martin admitted that the number of infections may rise temporarily when he announced the lifting of restrictions, so he called on people to continue to get vaccinated.

Denmark has suspended all restrictions from February 1, after the Danish Epidemiological Committee removed the COVID-19 pneumonia from the list of "socially critical diseases". That means nightclubs reopen, restaurants can continue to sell alcohol after 10 PM, and stores will no longer have limits on the number of customers. People do not need to show a vaccine pass when entering and leaving any place, and they can take public transportation without wearing a mask.

While the daily number of new cases continues to hit new highs, the Netherlands has decided to adopt a new strategy to deal with the COVID-19 epidemic. The new strategy will focus on keeping societies functioning, rather than targeting specific goals, such as monitoring pressure on health systems.

Dutch Health Minister Ernst Coopers said: "We have moved from eliminating risks to managing them so that we can live a more normal life." The Netherlands, which started a new round of lockdown in December 2021, has already allowed cafes, bars and restaurants reopen.

Sweden has not locked down or closed commercial facilities since the outbreak of the COVID-19 epidemic. The country, with a population of 10.3 million, has reported more than 2.2 million confirmed cases and has the highest number of confirmed cases and deaths among the five Nordic countries.

French President Emmanuel Macron, who faces elections in April, has decided to keep restrictions to a minimum, focusing on calling on French people to get vaccinated as soon as possible.

The French National Assembly passed a bill in January to replace the previous health pass with a vaccine pass. This means that people will need to show proof of vaccinations when entering restaurants, bars, cultural venues, take planes and trains. Previous health passes allowed people to enter these establishments after showing a negative Covid-19 test. France will no longer set limits on the number of people who can attend concerts, sporting events and other events after the introduction of the vaccine passport.

In January, the number of infections in France increased by hundreds of thousands a day. Despite a brief rise in hospitalizations, there have been significantly fewer patients requiring intensive care than in previous waves. After more than 500,000 new cases on January 25, the number of confirmed cases in France began to decline. At present, more than 75% of the French population has been vaccinated against the COVID-19.

European countries such as Italy, Spain, Finland, Switzerland and Norway are also easing restrictions on public life imposed by the fight against the virus.

"My biggest concern is the lemming effect (behavior of blind following) between countries," Michael Lane, executive director of the World Health Organization's Health Emergencies Program, said recently. He noted that while some countries have room to change their approach, some may choose to lift restrictions simply because of political pressure. Since the outbreak of the COVID-19 epidemic, demonstrations against the COVID-19 measures have taken place in many European countries.

Living with the virus is an “escape”

Storm Omicron, which began spreading in Europe from December 2021, has shown a trend of decreasing danger compared with the Delta strain, despite record numbers of infections in European countries. Even if the Omicron variant led to a significant increase in confirmed cases and a rise in hospital admissions, which put pressure on the health system in the short term, compared with previous waves of outbreaks, the intensive care unit was not overwhelmed.