This is the latest major move in America's fight against Omicron. The Biden administration has promised to distribute 500 million free quick home tests to Americans starting in January, with four free opportunities for each family. By December 2021, there were more than 300 million products on the market, up from 24 million in August of that year.As Omicron takes over every corner of the globe, experts are urging people to think: What kind of testing do we need right now? 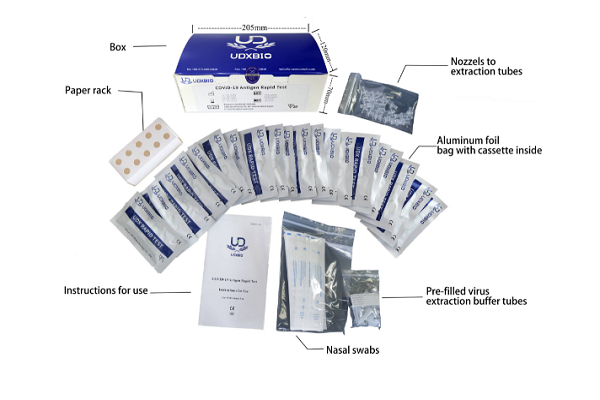 Open the rectangular blue box on your desk that contains two short tubes with some liquid in them. Take one of the tubes and insert it into the round bayonet that comes with the box. Hold the tubes upright. And do the most crucial step, picked up a box of a strip swab, it has successively into left and right sides of the nose, the more the better, but also in the depths of rotating a few times, and then put the swab in reagent tube, until it's completely into liquid head, this is also a few turns to be, let the swab in liquid bubble a minute, and then lost. The final step is to take the test strip inside the box, which is a long strip that looks like a pregnancy test, put it in the test tube and soak it for 10 minutes, then take it out and lay it horizontally, and after another five minutes, you can see the results on the test strip. Home rapid COVID-19 test kits at CVS, a US pharmacy chain.

Tens of thousands of families in the United States, people are trying to make the above steps, this is a kind of way can quickly test the new crown at home, collecting after nasal swabs, 10 ~ 15 minutes out of the results, if the paper shows two lines, is a blue, a pink, no matter how vague, the pink line is proof that you are positive, may be affected will be coronavirus. If there is only one blue line, it is negative. In the U.S., such kits typically come with two strips, cost $12 to $50, and require users to take two self-tests over three days, with 24 to 36 hours between them.

But why wait in long lines for nucleic acid tests when you can test for COVID-19 infections at home?

In fact, they work differently. Often said nucleic acid testing, mainly refers to the PCR (polymerase chain reaction) test, its essence is a kind of gene amplification technology, is the first will be a period of coronavirus RNA reverse transcription into double-stranded DNA, and then through the DNA polymerase amplification, will carry the virus gene amplification, and then through a kind of fluorescent probes to capture, When the amplified virus concentration reaches a critical value, a fluorescent signal is generated indicating that the sample has been detected as carrying the Novel Coronavirus.

And the "home rapid detection" used abroad is a kind of antigen detection technology, using the principle of virus antigen and antibody combination, to detect whether there is virus antigen in people's nasal secretions.

Another common immune test is antibody testing, but with the spread of vaccines in the population, most people have already developed antibodies to COVID-19, so this test has almost lost its diagnostic value if it is aimed at early screening.

What is regular home rapid testing?

As of January 18, the total number of confirmed COVID-19 cases in the United States had exceeded 66.42 million, according to Johns Hopkins University. In recent weeks, more than 800,000 new cases have been diagnosed each day in the United States, a 98 percent increase in the last 14 days, according to the New York Times. And to make matters worse, hospitals in 22 states and territories across the country are already under "high pressure," with about a quarter of hospitals with intensive care units reporting that at least 95% of ICU beds are full.

Under this serious situation, biden government had to increase the testing frequency, but the nucleic acid detection reagent supply ability, testing facilities and medical workers are facing a large gap, people had to be out in the cold for a few hours to wait for nucleic acid detection, as a result, the federal government began to attach importance to quickly detect the antigen is more simple and rapid alternative.

The public health experts said, the United States due to its capacity to keep up with nucleic acid detection, social mobilization and organization ability is insufficient, the spread of the expanding in the dense gram si cases, only as much as possible do antigen detection, at least can increase the detection and the detection probability, in order to isolate infected people in time, to slow the spread of the virus.

But as the Omicron tsunami has struck, Americans are finding that kits that were available at supermarkets, CVS and other major chains just six months ago are now sold out. With anxiety and complaints rising among the American public, Biden had to come out and explain "the lack of home testing across the country, because no one expected the new variant to spread as quickly as it has."

So far, the Biden administration has invested $3 billion in home rapid test kits and promised to distribute them free. According to researchers at Arizona State University, about 600 million COVID-19 tests are currently available in the United States each month, with home tests accounting for about half of them. Still, experts say the production of rapid tests must be increased to ensure that every American self-tests at the recommended twice-a-week rate. According to the nonprofit Kaiser Family Foundation, the U.S. currently needs five times as many home tests as the Biden administration deployed.