With the rapid spread of the mutant strain of the new crown virus Omi Keron, the number of new confirmed cases in the United 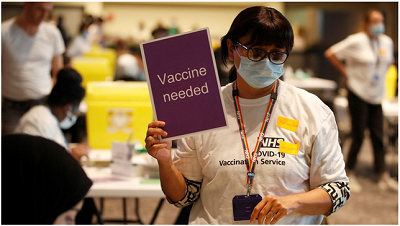 States in a single day exceeded 1 million this Monday (January 3), which is also the world's highest record since the outbreak. The next day, the US Centers for Disease Control recommended that people who were fully vaccinated with Pfizer's vaccine be given a booster one month in advance.

At the same time, Israel has begun to provide a fourth dose of vaccine to medical staff and people over 60. On Tuesday, local time, Israeli Prime Minister Naftali Bennett cited preliminary test results as saying that the fourth dose of Pfizer vaccine can increase the number of vaccinated antibodies by 5 times, thereby "significantly improving" the effect of preventing infection, hospitalization, and severe symptoms.

On Tuesday, local time, the Centers for Disease Control and Prevention (CDC) recommended that the interval between the third dose of Pfizer vaccine be shortened from six months after full vaccination to five months. Rochelle Varensky, the director of the center, pointed out that the recent surge in cases caused by the Omi Keron strain is the reason for the accelerated third injection.

However, this change is only for Pfizer vaccinators. The CDC still recommends that people who have received Modena's new crown vaccine wait 6 months after complete vaccination before getting the booster shot, while those who are vaccinated by Johnson & Johnson need two after a single dose of vaccination. Intensive injections every month.

The CDC also stated that children between the ages of 5 and 11 who have a "moderate to severely weakened" immune system are eligible for a booster shot 28 days after the initial Pfizer vaccine. At the same time, health officials will also discuss whether to provide booster injections for children aged 12 to 15 years after the US Food and Drug Administration advised Pfizer on Monday to provide a third injection for this age group.

As a "leader" in providing booster injections, Israel has provided citizens over 60 years of age, people with impaired immune systems, and medical staff with the fourth dose of the new crown vaccine from Monday, even before the latest test results came out policy.