With the end of the Christmas and New Year holidays, Omicron infections have shown an "explosive" increase in European and 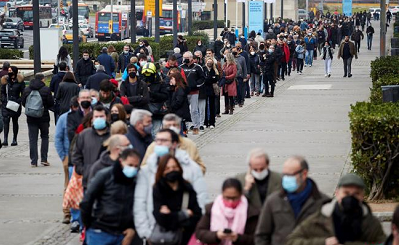 American countries, once again disrupting people's daily lives. However, in the face of this "unprecedented epidemic tsunami", some experts said, "If everyone you know is now infected with the Covid-19 virus, then you are not alone." Because Omicron is the fastest spread virus in human history.

Barcelonaians waiting in line for the Covid-19 vaccine

According to a media report on January 5, Spanish Basque medical historian Anton Ecoreca stated in an interview that the Covid-19 virus Omicron variant even surpassed the epidemic lymph gland known as the Black Death. The Omicron has become the most contagious disease in history.

The Black Death is one of the most serious plagues in human history. It originated in southwest Asia. From 1347 to 1353, it swept across Europe and claimed the lives of 25 million Europeans, accounting for one third of the total European population at that time. . In the following 300 years, the Black Death continued to "visit" Eurasia, claiming thousands of lives.

Now, Ecoreka pointed out that in terms of transmission, the Black Death took several years to spread around the world. Omicron has clearly surpassed the Black Death to become the most explosive and the fastest spreading speed in history. "it has broken the record for the speed of virus transmission." William Hanach, co-director of the Center for Infectious Disease Dynamics at Harvard University, expressed the same view. He also said in an interview that “this virus variant is undoubtedly the fastest spreading among the viruses that we can conduct detailed investigations."

Since it was discovered in southern African countries, this new strain has occupied a dominant position in all countries in the world in just one month, and there have been more cases of infection than any previous wave of epidemics. "This is an incredibly rapid spread." said Robbie Batacharia, an American infectious disease expert. In order to prove the contagious nature of Omicron, Battcharya made a rough calculation. If we compare Omicron with measles, another super contagious virus in the world, what will the result be?

Without vaccination, a measles patient will infect an average of 15 people. In contrast, a person infected with Omicron will infect an average of 6 people, but the most critical element is the so-called "intergenerational transmission time." That is, the number of days from when the first person is contagious to when the infected person is also contagious. Measles takes 12 days, while Omicron only takes 4 to 5 days.

Fortunately, based on the current research conclusions and the current situation in South Africa, where Omicron first broke out, Omicron’s "toxicity" has been reduced a lot. It is more likely to invade the upper respiratory tract, but it infects the lungs is poor, which has led to the current situation of extremely high infection rates in various countries, but low mortality rates.

Our company will provide you with professional testing equipment.