Although, like other variants of the COVID-19, infections caused by the Omicron will have a series of typical symptoms, including 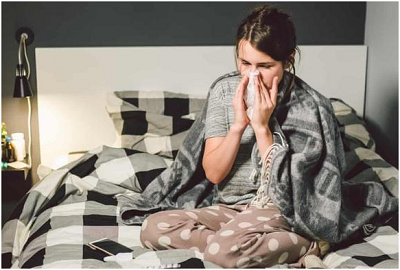 fever, cough, and loss of smell or taste, but according to some media reports, it will also cause some symptoms haven't reported before, including nausea and vomiting.

In recent days, Omicron infection cases in the United Kingdom and the United States have soared. According to the latest tracking data, the symptoms caused by this variant are indistinguishable from the common cold. The confirmed patients have runny nose, headache, fatigue, sneezing and sore throat.

▲Nearly half of the patients diagnosed with COVID-19 infected people in the UK said that the symptoms of the infection are similar to the common cold.

British experts said that the government urgently needs to update the COVID-19 symptom manual to avoid "misleading" the public with old information. Experts warn that if symptoms of the common cold appear, there may be a half chance of being infected with the COVID-19, and it is recommended to do rapid testing and home isolation be carried out in time.

Difference from the common cold in addition to the shutting of senses of smell and taste, andadd new symptoms such as nausea and vomiting

According to reports, the number of new cases of COVID-19 infections in the United Kingdom is still rising every day, reaching a record of more than 120,000 cases on December 24. It is estimated that more than 1.7 million people in the UK were infected with the COVID-19 virus last week, while the average daily number of new cases in the United States in the past week has exceeded 190,000.

▲On December 24, the daily increase in the number of cases in the UK reached a record more than 120,000

According to the UK epidemic tracking app ZOE COVID Symptom Study, if people have symptoms such as sore throat, runny nose and headache, it may not be a cold, but it is most likely to be infected with the COVID-19. According to the domestic epidemic data tracked, only about half of the patients who tested positive for the virus reported the three typical symptoms of fever, cough, and loss of smell or taste. More people have symptoms similar to the common cold.

"I hope people now realize that if symptoms similar to the common cold appear, it seems to be the main feature of Omicron infection." said Tim Spector, professor of genetic epidemiology at King's College London and one of the founders of ZOE. For most people, the symptoms of a confirmed case of Omicron are more like the common cold, starting with a sore throat, runny nose and headache. You only need to ask a friend who has recently tested positive for nucleic acid to verify it."

Previously, there was a big difference between the smell and taste failure caused by the COVID-19 virus infection and the similar symptoms caused by the common cold. Patients with COVID-19 have worse ability to distinguish smells, and it is difficult to taste bitterness and sweetness. In addition, patients with COVID-19 infections have a loss of sense of smell but usually do not have runny nose or nasal congestion like cold patients. However, ZOE data shows that smell and taste failure are no longer "a powerful tool to distinguish between the two", because patients with COVID-19 infections now report the typical symptoms of taste or smell loss "not too frequently".

The ZOE data analysis was supported by the British Emergency Scientific Advisory Group (SAGE). SAGE stated that there is "preliminary evidence" that Omicron's infection symptoms are changing.

Specter also stated on December 26 that Omicron's cold-like symptoms should not relax anyone. According to him, some patients infected with Omicron also developed new symptoms of nausea and vomiting. These symptoms are reported by people who are fully vaccinated and some people who have received booster vaccines. He warned the public not to relax their vigilance and need to wear masks again, cancel parties, work at home, etc. to slow the rapid spread of Omicron.

▲According to a Hong Kong research report, Omicron replicates 70 times faster in bronchial tissues than other virus variants, and 10 times slower in lung tissues

Symptoms caused by Omicron range from mild to moderate, but it soars faster. According to reports, due to the Omicron variant, the number of new cases confirmed daily in the UK is still rising, reaching a record of more than 120,000 cases on December 24. As of December 26, local time, the average daily number of new cases in the United States in the past seven days has exceeded 190,000, an increase of 65% over the past two weeks.

The WHO recently warned that the symptoms caused by Omicron are milder than previous strains, but the rapid spreading speed will once again threaten the health care systems of many countries. The Mayor of London Sadiq Khan has listed the spread of Omicron as a "significant event" and decided to cancel the large-scale New Year celebrations. The British government is also preparing to continue to expand the vaccination plan, calling on the public to speed up vaccination.British experts said that the government also urgently needs to update the COVID-19virus symptom manual, acknowledging that the symptoms caused by Omicron are more like the common cold, so as to ensure that when people have similar symptoms, they can carry out antigen rapid testing and home isolation as soon as possible to reduce transmission. Spector said that the British government’s “misinformation” on the COVID-19 symptom guidebook is shocking. “The government needs to urgently modify public information to save lives, because now half of the people with cold symptoms may be diagnosed with the COVID-19."

According to the NHS website of the British medical service system, the main symptoms of the corona virus are listed as: high fever; persistent cough, including continuous coughing for more than one hour or more; loss or change sense of smell or taste. It is recommended that as long as any of the above three symptoms occur, antigen rapid testing and self-isolation should be carried out as soon as possible.

▲At present, the main symptoms of COVID-19 infection listed on the NHS website are: high fever, persistent cough, and loss sense of smell/taste

Peter Ornshaw, a professor of experimental medicine at Imperial College London, also said that the Omicron strain is changing the type of cells it infects in order to spread more widely. It seems to be more inclined to infect the respiratory tract, which leads to changes in the symptoms of infection. According to an unpeer-reviewed study in Hong Kong, the replication speed of Omicron virus in human bronchial tissue is 70 times faster than other variants, and the replication speed in lung tissue is 10 times slower than other original virus. It may cause the virus to spread more easily and cause milder symptoms.