The new crown epidemic in Vietnam has recently rebounded again, and the number of confirmed cases in some areas has continued to rise. The capital Hanoi reported 21,395 new confirmed cases on the same day, a new high.

According to the Vietnam News Agency, Vietnamese Prime Minister Pham Minh Thanh said on the 3rd that relevant departments should accurately assess the progress of the epidemic, refer to international experience, and take appropriate and effective measures to gradually normalize the situation.

The Vietnamese government announced on February 16 that it will fully open to international tourism from March 15. 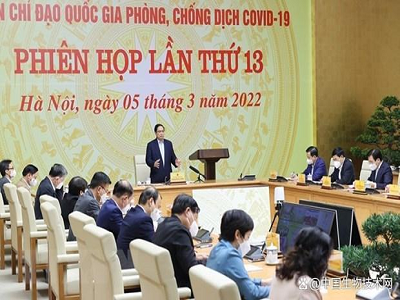 From 16:00 on March 5 to 16:00 on March 6, Vietnam reported 142,136 new confirmed cases of new coronary pneumonia, including 142,128 local confirmed cases, an increase of more than 10,000 cases compared with the previous day, and the epidemic has been refreshed for 17 consecutive days. The highest since the outbreak. There were 87 new deaths.

Hanoi has always been the place with the largest number of confirmed cases in Vietnam. There were 29,578 new confirmed cases yesterday, an increase of more than 4,000 cases from the previous day.

On March 5, Vietnamese Prime Minister Pham Minh Zheng pointed out at the meeting that the current epidemic of new crown pneumonia in Vietnam is still under control. However, in the recent past, especially after the entry of Omicron, the number of local confirmed cases has increased in many places. However, he emphasized that so far, the epidemic situation in Vietnam has basically been controlled, and the goal of resolution 128/NQ-CP on reducing the risk and mortality from mild to severe disease has been achieved.

Pham Minh Teng pointed out that Vietnam's vaccination work has achieved initial success. Compared with other countries in the region and the world, Vietnam's vaccine coverage rate is at a high level. In terms of treatment, Vietnam has harmoniously, rationally, flexibly and effectively combined treatment in medical institutions with home treatment; Vietnam is moving in the right direction and increasingly achieving remarkable results.

On the same day, the Vietnamese government announced that all border crossings will be opened from March 15. Tourists can not only enter by international flights as in the pilot phase, but also reach Vietnam by land and sea. Regarding visas, Vietnam will consider reinstating bilateral visas for 13 countries and 88 countries/regions before the outbreak.

Requirements for new coronavirus test results will also be relaxed. International tourists can choose a nucleic acid negative certificate valid for 72 hours or a rapid test valid for 24 hours. Those with negative test results will be able to participate in various tourism activities like domestic tourists in Vietnam.