Rapid influenza diagnostic tests are antigen detection tests that detect influenza viral nucleoprotein antigen.The commercially available RIDTs discussed in and can provide results within 30 minutes or less.Thus,results are available in a clinically relevant time period to inform clinical decisions.These assays may be referred to as “point-of care” tests since CLIA-waived RIDTs (not all RIDTs are CLIA waived) may be used in facilities with a certificate of waiver or in locations outside a central laboratory.Commercially available RIDTs can either:

1.Detect and distinguish between influenza A and B viruses; 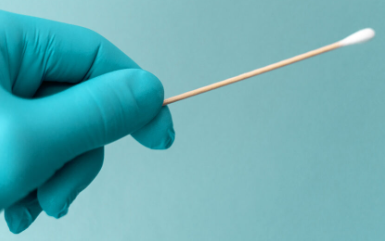 The Role of RIDT for Detecting Novel H1N1: Clinical Considerations

A RIDT may provide useful information that might impact on patient care.However,understanding the limitations of RIDTs is very important to appropriately interpret results for clinical management.When influenza viruses are circulating in a community,a positive test result indicates that influenza virus infection is likely present in the specimen.Knowledge of the presence of influenza A or B virus infection can help to inform influenza treatment decisions.However,a negative rapid test result does not rule out influenza virus infection.Since false negative results can occur,if clinical suspicion of influenza is high in a patient who tests negative by RIDT (or if RIDT is not offered),empiric antiviral therapy should be administered,if appropriate,and infection control measures implemented.Guidance on the use of influenza antiviral agents is available.In settings where policies indicate exclusion of patients who may have influenza (e.g., schools,camps,day care centers),a negative RIDT,performed on a patient with clinically compatible illness,should not be used as justification for early return to that setting.Finally, a negative RIDT result can not exclude influenza as a cause of an outbreak in a facility with ill residents or patients with clinically compatible illness.The specificity of RIDTs is generally high.However,especially during periods of low influenza activity (e.g. the very beginning of the season), false positive results can occur.During low influenza activity periods,confirmation of positive RIDT results by another testing method such as viral culture or rRT-PCR should be considered.If laboratories are performing RIDTs,it would be prudent to add a statement about the test limitations in the report of results so that the physician can decide how best to use the test for patient management.

RIDT result:Negative for Influenza A and B
Note:The sensitivity of this assay has been shown to range between [10-70%*] for the detection of novel influenza A (H1N1) virus and between [20-100%*] for seasonal influenza viruses.A negative result does not exclude influenza virus infection.If influenza is circulating in your community,a diagnosis of influenza should be considered based on a patient’s clinical presentation and empiric antiviral treatment should be considered,if indicated.If more conclusive testing is desired,follow-up confirmatory testing with either [viral culture or RT-PCR*] is warranted.

Antiviral Drugs for Treatment of Influenza

The neuraminidase inhibitors are the drugs of choice for treatment of 2009 H1N1 influenza and influenza-like illness in both children and adults.

Oseltamivir-The neuraminidase inhibitor oseltamivir formulated as capsules or oral suspension approved for the treatment of uncomplicated acute influenza in patients 1 year and older who have been symptomatic for no more than 2 days.The FDA has issued an Emergency Use Authorization (EUA) authorizing treatment with oseltamivir of patients less than 1 year old with 2009 H1N1 influenza.In addition,the EUA authorizes treatment of patients symptomatic with 2009 H1N1 influenza for more than 2 days and patients sick enough to require hospitalization.

Zanamivir-The neuraminidase inhibitor zanamivir formulated for oral inhalation approved for the treatment of influenza in patients 7 years of age and older who,similar to approved uses for oseltamivir,have uncomplicated illness and have been symptomatic for no more than 2 days.As with oseltamivir,the FDA has issued an EUA authorizing treatment with zanamivir of patients with 2009 H1N1 influenza who have been symptomatic for more than 2 days and patients sick enough to require hospitalization.

Peramivir-A third neuraminidase inhibitor peramivir formulated for intravenous (IV) administration is an investigational product currently being evaluated in clinical trials.As of October,safety and/or efficacy data from 1,891 patients with acute uncomplicated seasonal influenza A has been submitted to the FDA. Efficacy and safety have not been evaluated in hospitalized patients.Even though the data are insufficient to allow FDA approval,the FDA issued an EUA for treatment with peramivir of hospitalized patients with 2009 H1N1 influenza who have potentially life-threatening suspected or laboratory confirmed infection. Peramivir IV is available through the CDC upon request of a licensed physician. Under the EUA,treatment of adult patients with IV peramivir is approved only if: (1) the patient has not responded to either oral or inhaled antiviral therapy; (2) drug delivery by a route other than IV is not expected to be dependable or is not feasible;or (3) the clinician judges IV therapy is appropriate due to other circumstances.Treatment of pediatric patients is approved if either of the first two criteria apply.