The World Health Organization (WHO) said today that the number of new infections (down 5%) and deaths (down 8%) have continued to decline globally in the past week, except for the rebound in Asia-Pacific regions such as Hong Kong, Vietnam, South Korea, and New Zealand. , the global epidemic has maintained a downward trend for more than a month. World Health Organization: Global coronavirus cases, deaths continue to decline

Aside from the Asia-Pacific region, the regions that have experienced the peaks of the first five waves of the epidemic have seen a significant downward 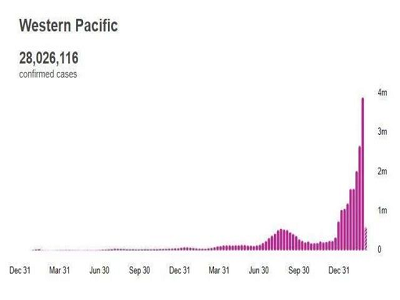 trend, especially although on March 7, the global epidemic just reached the brutal milestone of 6 million new crown deaths. But judging by recent data, the once daunting peak of the new crown pandemic is really about to turn the page. Perhaps many people still experience mild symptoms or sequelae, but at least the era of high mortality has passed.

In the past two weeks, many countries around the world have liberalized their epidemic prevention policies. In the United States, on March 8, Hawaii became the last state in the United States to lift restrictions on the epidemic. So far, all 50 states in the United States no longer mandate wearing masks and no longer provide large-scale testing. Some regions have even waived vaccine restrictions, allowing free access to public places without the need for full vaccination and identification. The Middle East and Africa, once the hardest hit areas, have fallen by 46% and 40% respectively.

Canada and the United States also announced their unblocking. Last Friday, Chief Health Officer Dr. Tam Wing Sze announced on behalf of the federal government of Canada to ease restrictions, open the country, do not have to wear masks mandatory, and allow provincial governments to formulate their own unblocking plans. At present, of the 10 provinces in Canada, only BC has not announced the unblocking plan yet, and still maintains the mandatory mask order and vaccine card system, and the rest of the provinces have let themselves go.

The United Kingdom opened up earlier. It proposed an unblocking plan on January 20, and finally lifted the block on February 24, saying goodbye to important measures such as mandatory masks, self-isolation, and national epidemic prevention team meetings.

The UK opened up early, in part because it followed the pace across Europe. As early as last year's Christmas season, some European countries had already unblocked in advance. Belgium, Portugal, Germany, the Netherlands, Denmark, Sweden, Finland, and more than a dozen European countries had all abandoned the treatment. The British people were complaining and had no choice but to unblock!

Looking at the global epidemic trend, with the exception of Asia, Australia, and Africa, which are still clinging to the line of defense, North America and Northern Europe have almost completely declared the end of the epidemic.

This means that the new crown epidemic may be reduced from a global pandemic to an epidemic or endemic.Compared with the current progress of the epidemic in various countries, Sweden's anti-epidemic strategy has attracted much attention recently. As one of the first countries in Europe to renounce treatment, Sweden has been coexisting with the new coronavirus in recent months. The country lifted all mandatory lockdowns and replaced them with voluntary measures. The committee believes that Sweden's strategy to prevent the new crown epidemic from closing the city is generally correct.

Whether it should be banned or not, how to lift the ban, in fact, the situation in different regions and provinces is different, and the way is to be explored by oneself.Now there are only two paths for residents of all countries to choose, either "coexistence" or "zero". Obviously, the cost of the latter is too great for every country to accept.

According to the Associated Press, 24 public health experts in the United States jointly released a white paper on the epidemic, detailing the details and strategies for coexisting with the new crown in the future. some outlook.

Although none of these visions have materialized yet, it may not be long before experts teach us how to live with the new crown.