The WHO stated that Omicron mainly infects the upper respiratory tract and the symptoms are relatively mild. The American 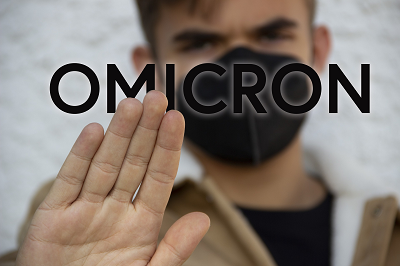 medical community believes that the COVID-19 will eventually become flu, and people should live with the virus, but at the same time a new variant of the virus has been discovered in France-is it possible to see the end of the epidemic in 2022?

(Deutsche Welle Chinese website) The World Health Organization pointed out that there is more evidence that the Omicron variant virus mainly infects the upper respiratory tract, so the symptoms are milder than other variant viruses in the past. Although it caused the number of cases to soar, but The mortality rate is low. Some infectious disease experts in the United States have asserted that the COVID-19 will become flu, and if the number of hospitalizations can be controlled, the epidemic is expected to end.

WHO official Abdi Mahamud told reporters in Geneva on Tuesday (4th): "More and more studies have shown that Omicron, unlike other variants, can cause severe pneumonia." He added that this may be Good news, "but we need more research to prove this."

South Africa, one of the first countries to discover Omicron, also has research showing that Omicron has a low risk of causing severe illness. Mahmoud also reminded that because South Africa has a relatively young population, the situation may be different from other countries.

Mahmoud warned that Omicron’s high infectiousness means that it will become a mainstream virus in many places within a few weeks and pose a threat to the medical system of countries with a high proportion of unvaccinated populations.Researchers in Japan and the United States have found in animal studies that Omicron attacks the lungs much less frequently than other variant viruses. The study pointed out that Omicron is more likely to attack the upper respiratory tract, such as the nose, throat, and trachea, but the study has not yet been peer-reviewed.

In mid-December, researchers at the University of Hong Kong came to a very similar conclusion. They found that although Omicron infects the bronchus 70 times faster than the Delta variant virus, it spreads in actual lung tissue 10 times slower.

Since Omicron was detected in November, it began to spread rapidly around the world. WHO data shows that Omicron has appeared in at least 128 countries, bringing new difficulties to the people of these countries and interrupting their slowly recovering economy and daily life.

When asked if the Omicron vaccine is needed, Mahmoud said that it is too early to make a conclusion, but he is skeptical, and emphasized that this decision requires global coordination and should not be made by the manufacturer alone. .

"Using the Omicron vaccine is like putting all the eggs in the same basket, because there may also be a new variant that is more spreading or more immunodestructive," he said.

The WHO continues to call on the people to vaccinate. At the same time, France has discovered a new variant of the new coronavirus, IHU, which has 46 mutations, more than Omicron, and 12 people have been diagnosed. The WHO said that the variant virus currently does not pose much of a threat.

According to a study that has not been peer-reviewed, this new mutant called “B.1.640.2” has 46 “atypical combinations” of mutations, more than Omicron, which has 37 mutations. .

The Mediterranean Hospital in Marseille, France, pointed out that they detected this new variant on a passenger returning to France from Cameroon in early December. 12 people have been infected, but this does not mean that the variant also appeared in Cameroon. .

Will the epidemic end?

The fast-transmitting Omicron variant virus has complicated the question of when the epidemic will end. However, the Associated Press stated that the epidemic is not like a light switch that can be directly turned on or off. The world will have to learn from a permanent Viruses that do not disappear coexist.

Albert Ko, an infectious disease expert at the Yale School of Public Health, said, “Of course, the COVID-19 will always be with us. We will never be able to eradicate or eliminate the COVID-19, so we must clearly define our goals.”

At some stage, the WHO will determine that enough countries can adequately control the new crown cases, or at least control the number of hospital deaths, to declare the pandemic officially over. However, it is still unclear what this threshold is.

Even if most countries control the number of severe cases, some regions will still be deeply involved in the epidemic, especially low-income countries that lack adequate vaccines or medical systems, while other regions are more likely to get into what scientists call an "epidemic" state.

Omicron's attack on the lungs is not serious, so patients do not need to use oxygen cylinders.

Stephen Kissler, an infectious disease expert at Harvard University's Chen Zengxi School of Public Health, said that when the new coronavirus reaches "some acceptable stable state", we can think that it has become a common epidemic like influenza. sick.

He said: "The crisis caused by Omicron shows that we have not yet reached that point, but I do think we will reach a point in time when the new crown epidemic is no different from the flu."

Take the United States as an example. The COVID-19 has caused more than 800,000 deaths in two years, while only about 12,000 to 52,000 Americans have died of influenza. How many confirmed cases and deaths the world will endure is mainly a social issue, not a scientific issue.

Amesh Adalja, a scholar at the Johns Hopkins University Health and Safety Center, said: "We will not go back to 2019. We must make people think about the degree of risk."

2022 Deutsche Welle's copyright statement: All content in this article is protected by copyright law. Unless specifically authorized by Deutsche Welle, you may not use it without authorization. Any misconduct will lead to recovery and criminal prosecution.