Is your company ready for IVDR, or is there a dangerous gap in your strategy? This November marks the midpoint of the five-year transition to the In Vitro Diagnostic Regulation (IVDR) 2017/746, a major regulatory reform that requires the reclassification and recertification of all IVD devices registered in the EU. As the scope expands and requirements become stricter, IVDR affects the entire supply chain. The transition period in May 2022 seems to have a long way to go, but there is no time to waste.

There is no doubt that European regulators have also noticed the potential crisis.

In October, they issued a draft that extended the transition period for certain types of devices under IVDR and promoted some regulations for "in-house devices" applicable to regulated laboratories. However, according to the draft, the implementation date of IVDR is still May 26, 2022, which means that all equipment to be evaluated must be reviewed by the designated NB after this date. Two months later, the European Union formally adopted the proposal earlier this month, blaming the need for the extension of time on the ongoing COVID-19 pandemic, which the European Union claimed prevented the necessary work to successfully implement IVDR on time. 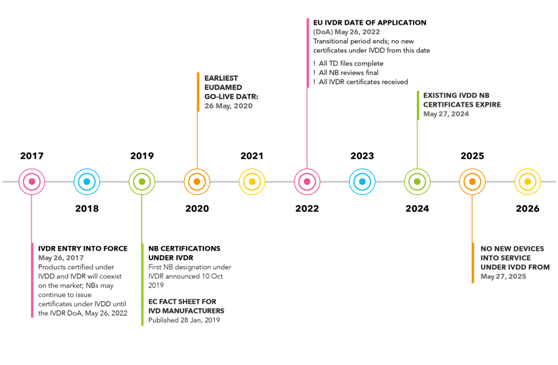 "In the context of the COVID-19 pandemic, member states, health institutions, and social capital have redeployed financial and other resources to deal with the unprecedented challenges posed by the crisis." A statement from the European Union on December 20 Zhong said, “By doing so, they delayed the implementation of the 2017 In Vitro Diagnostic Medical Device Regulation (IVDR), which imposes certain requirements on medical devices and strengthens the role of the so-called conformity assessment agency. Joint legislation Through this proposal, the author will maintain the flow of supply of these basic healthcare products."